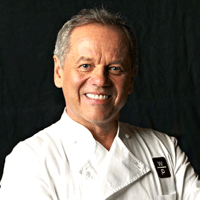 It would be extremely rare for the name Wolfgang Puck to not come up in the cooking world. He is the only chef to have won the Outstanding Chef of the Year Award two times. The celebrity chef has built a culinary empire that includes three businesses: Wolfgang Puck Fine Dining Group, Wolfgang Puck Catering, and Wolfgang Puck Worldwide, Inc.

After coming to Los Angeles in 1975, Wolfgang Puck quickly gained attention from the Hollywood elite. He became part owner of Ma Maison in West Hollywood, which led him to start his first flagship restaurant, Spago – which earned him the James Beard Foundation Award for Outstanding Chef of the Year, twice, and Restaurant of the Year in 1994, and two Michelin stars. Puck began opening up several more restaurants and steakhouses around the country. Puck is praised for changing the way Americans cook and eat by combining several cultures into one.

BIO: After graduating first in his class at the French Culinary Institute, Chef Zakary Pelaccio worked at The French Laundry under Thomas Keller and at Daniel with Daniel Boulud.

Zakary is now the Executive Chef at 5 Ninth and Fatty Crab in Manhattan’s Meatpacking District. 5 Ninth’s menu consists of classic French, where Fatty Crab has a Southeast Asian menu showcasing his time spent traveling in Asia and cooking at Seri Melayu in Kuala Lumur as well as the Thai Kitchen of the Westin Hotel in Chiang Mai, Thailand.

Before Zakary Pelaccio opened 5 Ninth, he earned much recognition from NY foodie insiders at the Chickenbone Café in Brooklyn. Zakary is a proud supporter of Slow Food, which focuses on preserving rare breeds of animals indigenous to the U.S.

Zakary wasn’t always a chef, after he graduated from the University of Vermont, he ran his own food software business, trained as a manager and purchasing agent with the Myriad Restaurant Group and a scriptwriter and field producer for the Food Network. Currently, Zakary Pelaccio is also the consulting chef for 230 Fifth, a rooftop bar lounge in the Flatrion District.

To hire Zakary Pelaccio for an endorsement, personal appearances, or book signing contact the experts at Celebrity Chef Network at booking@celebritychefnetwork.com  or 212-410-9879. 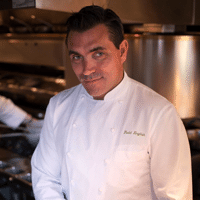 World-renowned celebrity chef, Todd English, has accomplished a variety of achievements in the culinary profession.  He owns multiple restaurants in his hometown of Boston, two of the most popular being Olives and Figs.  English does not restrict his talents only in Boston, owning restaurants all over the United States, such as Las Vegas, New York City, Walt Disney World in Orlando, Palm Beach, as well as others; in total, English owns over 15 well-respected restaurants.  Famous actress, Eva Longoria, teamed up with Todd to create the restaurant Beso, which has been highly touted in the Los Angeles and Las Vegas area.  In 2012, the Todd English, P.U.B restaurant in Las Vegas was inducted into the Culinary Hall of Fame.  English’s restaurants have won countless awards, including “Best New Restaurant” by Boston Magazine and “Best Food and Top Table” by Gourmet Magazine.

Outside of his illustrious restaurants, English has authored four cookbooks: The Olives Table, The Olives Dessert, The Figs Table, and Cooking in Everyday English.  Todd English also has TV personality to add to his résumé, as he hosts the show Food Trip with Todd English.  The show is Award-Winning and Emmy-Nominated in its second season.  Described one of the most gifted, decorated and charismatic chefs in the world, there is no wonder why Todd English has gathered a loyal following with the likes of A-List celebs George Clooney, Martha Stewart, and former U.S. president, Bill Clinton.