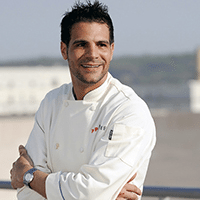 BIO: Growing up with a Dominican father and an Italian mother, meals were a serious affair. Angelo Sosa graduated from the Culinary Institute of America after he ran the kitchen at the Escoffier Room.

Teaming with Christian Bertrand at the Four-Diamond, Stonehenge Restaurant & Inn, Angelo served as Christian’s sous chef at the opening of Acqua. In 1999, Christian Bertrand referred Angelo Sosa to Jean-Georges Vongerichten, who eventually became his mentor.

Angelo’s appearances include being a casts member on season 7 of Bravo’s Top Chef and was invited to compete on Top Chef All Stars. His more recent project, Social Eatz, features a menu that includes NYC staples with a mix of flavors from across Asia; Angelo is also the executive chef. He is available for hosting, cooking demonstrations, and endorsements.

To hire Angelo Sosa for an endorsement, personal appearances, or book signing contact the experts at Celebrity Chef Network at booking@celebritychefnetwork.com  or 212-410-9879.