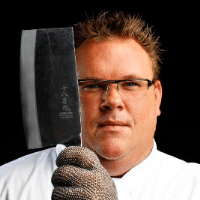 Chef Chris spent nine years at Brennan’s of Houston working alongside his friend Chef Randy Evans, author of the cookbook titled The Kitchen Table. While working at Brennan’s he also served as a sommelier as well as his executive sous-chef duties, further expanding his ideas on dining and what goes into the experience. After five years as Executive Chef with Catalan Food & Wine, he was able to secure his own place and start his own restaurant called Underbelly.

Underbelly is an eatery committed to bringing together all the culinary history of Houston. Chef Chris designed a kitchen with low counters so that his customers can see and talk to the chefs preparing their food for a richer experience. The cuisine at Underbelly embraces an American creole style cuisine with an Asian twang. Like Chef Jamie Malone in Minneapolis and Chef Matthew Gaudet, Chef Chris also tries to obtain his seafood through sustainable sources while raising herds and growing his own produce locally. Southern Living Magazine named Underbelly one of its best new restaurants of the south and Chef Chris Shepherd continues to bring pride to the Houston community through his cuisine.