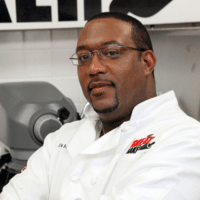 Known by some as The Sugar Daddy, or the King of Cakes, celebrity chef Dana Herbert is an expert on every sweet and savory treat.  Chef Herbert began his studies at the University of Delaware where he majored in Hotel Restaurant and Institutional Management. Post graduation, he continued his studies at the esteemed Johnson and Wales University where he mastered his culinary skills and became an expert in the art of pastry making.  Chef Herbert then went on to work at the Four Seasons Boston, and as a pastry chef at the Philadelphia Downtown Marriott before opening up his own business in Delaware, Desserts by Dana.  The business became a huge success, featured on WEtv and many news outlets, but what made Chef Dana Herbert a dominating force in the culinary industry was his win on the first season of Cake Boss: Next Great Baker. Since winning the show, Chef Herbert has been invited to work in Hoboken with the renowned Cake Boss Buddy Valastro, and has also graced the cover of Essence, Fitness Magazine, Catering Magazine, the Huffington Post, and Chef Magazine, to name a few.  He has also been featured on popular foodie television programs Wedding Cake Wars and TLC’s Ultimate Cake Off for his baking expertise.

But let’s not forget that there’s more to celebrity chef Dana Herbert than cakes and desserts. Aside from being a pastry chef, Herbert is also an expert in the culinary field. His talents in the kitchen have caught the eyes of James Beard, and he has since been invited to be a part of the James Beard Celebrity Chef tour. Chef Herbert has even authored his own cookbook called the Sweet and Savory Union, a title that epitomizes his cooking style. In addition to the James Beard tour, Dana also tours the country with healthcare company Novo Nordisk, and works to educate people with Diabetes on how they can create culinary masterpieces that are delicious, yet still nutritious, and manageable for a sugar free diet. Chef Dana Herbert has also created the fundraiser Cake for the Cure, which built the world’s largest wedding cake to benefit the Susan G. Komen foundation. Outside of baking and cooking, Dana is married and has two young children.