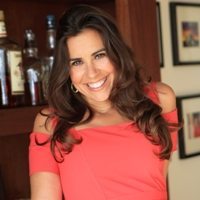 As a New York Time Bestselling Author, Weight Loss Expert and prominent Healthy Foods Chef, Devin Alexander has joined in the fight against obesity and is winning the battle with her unique approach to healthy cooking. Celebrity Chef Speaker Devin inspires her fans and audiences through her own wight loss journey, having lost over 70-lbs. since beginning close to 20 years ago. Devin lives and eats her message: “You don‘t have to deprive yourself to be fit and healthy.” In June of 2017, Devin announced the launch of her new lifestyle and health radio show, Have It All!, in conjunction with Voice America.

Celebrity Chef Speaker Devin currently works as a lead chef on NBC’s The Biggest Loser and has written all of The Biggest Loser official cookbook series installments since joining the team in 2006. She is a proud author of 8 cookbooks total, the others being Fast Food Fix, The Most Decadent Diet Ever and I Can’t Believe It’s Not Fattening. As a health foods author, Devin Alexander has written over 200 food-related articles in Prevention, Women’s Health, Shape, Clean Eating, Men’s Fitness and Cooking Expert to Women’s Health Magazine and Culinary Advisor to Men’s Fitness. Devin has appeared on many major morning shows and was a SpokesChef and consultant for numerous major U.S. food and health related corporations and is a frequent speaker. Devin Alexander has worked as a Private Cooking Instructor for a Healthy Lifestyle where she has helped hundreds of clients shed pounds.

Devin is the creator and executive chef of the restaurant called Devinly Decadence which is featured on Royal Caribbean Cruiselines. She is also the host of the PBS cooking TV series America’s Chefs on Tour. Her unique approach to healthy cooking and her motivational personal story have landed her personal appearances on more weight loss and fitness shows than any other food expert or nutritionist in America. She has made appearances on TV broadcasts including: Dr. Phil, HLN, Martha Stewart Radio, Today Show, Fox, QVC, The Biggest Loser, The Big Story, Discovery Health, and HGTV.

To hire Devin Alexander for an endorsement, personal appearances, or book signing contact the experts at Celebrity Chef Network at booking@celebritychefnetwork.com  or 212-410-9879.