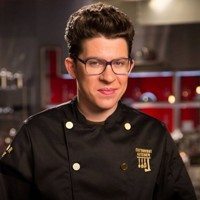 Celebrity Chef Justin Warner knows no boundaries in the kitchen. In his world, the laws of cooking were meant to be broken! He is best recognized as the season 8 winner of Food Network Star. Since his big win, Chef Justin has carved his own lane in the culinary industry with his exciting, unconventional cooking style. In October of 2015, Chef Justin released his first cookbook titled The Laws of Cooking: And How to Break Them. The book introduces readers to a new way of thinking in the kitchen to create inventive and exciting recipes using familiar flavor combinations.

Chef Justin is completely self-taught, which accounts for his inquisitive nature when it comes to traditional recipes and cooking methods. He first started working in restaurants when he was 15 years old. He learned all he could about food, wine and fine dining and eventually opened his own restaurant called Do or Dine in New York. In May of 2015, he launched his own web series with Food Network called Foodie Call with Justin Warner. The exciting video series follows Chef Justin as he travels across the country to meet famous culinary personalities on the forefront of the latest food trends.