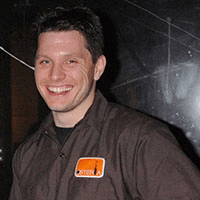 BIO: Jeff Michaud is the executive chef and owner of Osteria Restaurant and Amis Restaurant. He began his cooking career at 13 in a pizza shop in his hometown of New Hampshire. Being inspired by his grandmother, Jeff Michaud attended the Culinary Institute of America.

After graduation, he moved to Aspen, Colorado and joined the kitchen staff at the Caribou Club, and eventually worked his way to executive sous chef. Next, he moved back to the east coast to Philadelphia and cooked with acclaimed chef Marc Vetri at Ristorante Vetri as the sous chef. Here, he discovered his passion for Italian food and decided to improve his skills by moving to Bergamo, Lombardia, Italy.

Upon arrival in Italy, he worked for a family owned butcher shop, Mangilli, in hopes of refining his meat fabrication skills, sausage, and salame making. The next two years, Jeff Michaud spent working his way through the top restaurants of Bergamo such as Michelin starred Frosio and La Lucanda, La Brugheria, Ristorante Loro, Ol Fa Pasticceria. He was named executive chef at Locanda del Biancospino, a small Inn in the foothills of the Alps. Eventually, Jeff Michaud made his way back to Philadelphia and rejoined the Vetri team. Together they opened Osteria, which has been named Best New Restaurant by Philadelphia magazine.

To hire Jeff Michaud for an endorsement, personal appearances, or book signing contact the experts at Celebrity Chef Network at booking@celebritychefnetwork.com  or 212-410-9879.