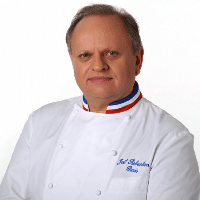 At age 15, Robuchon became an apprentice pastry chef at the Relais of Poitiers hotel. In 1966 at the age of 21, Robuchon became the official chef of Le Tour de France, where he learned a variety of new cooking techniques. Seven years later, he was appointed head chef at the Concord-Lafayette hotel, where he managed 90 cooks and served several thousand meals per day. During this year, he won the prestigious Meilleur Ouvrier de France award.  At the age of 31, Robuchon remarkably won the Meilleur Ouvrier de France again for his culinary genius. In 1981, he started his first restaurant in Paris called Jamin.  Three years later, Robuchon became the youngest chef to ever own a three-star restaurant. In 1989, Gault Millau named Robuchon the Chef of the Century. In 1994, the Joel Robuchon restaurant was awarded Best Restaurant in the World by the International Herald Tribune. Robuchon is a permanent member of the Academie Culinaire de France, and he owns 19 restaurants worldwide. Over the span of his career, he has earned 28 Michelin Guide stars, which is the most of any chef in the world.

Robuchon is well- known for his ability to emphasize flavors and ingredients within a dish.  In addition, he is recognized for mentoring Gordon Ramsay, Eric Ripert, and Michael Caines. Since 2011, Robuchon has hosted a TV show called Planete Gourmande, in which he gives the audience cooking tips and recipes. Robuchon has written a number of cookbooks, including Simply French, Tout Robuchon, French Cheeses, and Joel Robuchon Cooking Through the Seasons.