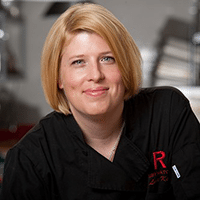 Does Virtual Events:
TV Show: No
Cookbook: No
Restaurant: No
Cuisine: Garden to Table
Fee Range: Under $10,000

BIO: Celebrity Chef Lora Kirk is one of Canada’s foremost culinary authorities who has over 14 years of international culinary experience. A native of Peterborough, Ontario, Lora says she was greatly influenced by working on her grandparent’s farm, as it is here she learnt the importance of supporting local farmers and growers. This mantra is still reflected in her cooking style today, as she utilizes fresh, locally grown ingredients in her dishes.

Lora Kirk always had the dream of being a professional chef. She began her culinary career at the Algonquin College culinary program, and after graduation moved to London, England. While in London, Chef Kirk gained worlds of experience working with renowned chefs Gordon Ramsey and Angela Hartnett. Under Hartnett’s tutelage, Kirk was able to work at the famous Connaught Hotel for three years.

After her stint over seas, Chef Lora Kirk returned to Canada, accepting a position as Truffle’s Chef at the Four Season Hotel in Toronto. While at the Four Seasons, Kirk garnered tremendous media attention and was awarded the Five Diamond award for two consecutive years, four stars in Toronto Life and the OHI Top 30 Under 30 Award. Additionally, she was afforded the honor of cooking at the James Beard House and in Kitchen Stadium on Iron Chef America in New York City.

Next, Chef Kirk decided to move to New York City in attempts to further her culinary career. She took a position at Manhattan’s Allen and Delancy Restaurant as Chef de Cuisine with Neil Ferguson. She received the Top 10 New Restaurants award in the New York Times and a very prestigious Michelin Star for her talents. Chef Kirk went on to run the kitchens at the SOHO House in New York.

After traveling and cooking around the world, Chef Lora Kirk has returned home to Toronto. She is regarded as one of the highest-profile women chefs and is ready to share her talents as Chef of Ruby Watchco. Chef Kirk has a track record of success, and the culinary world will continue to expect wondrous dishes to come out of her kitchens. Celebrity Chef Lora Kirk is available for speaking engagements, endorsements, and cooking demonstrations.

To hire Lora Kirk for an endorsement, personal appearances, or book signing contact the experts at Celebrity Chef Network at booking@celebritychefnetwork.com  or 212-410-9879.