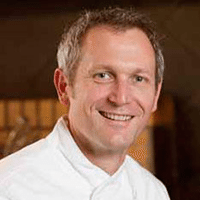 BIO: With over 20 years of experience, Mark Dommen has had classical training with some of the world’s most renowned culinary masters.  With Mark’s modern twist on American cuisine, he moved to One Market in 2004 and eventually earned the restaurant a Michelin star for the fourth year in a row in 2011. He has also been named a 2007 StarChefs.com Rising Star and One Market held a constant occurrence on the Chronicle’s Top 100 restaurant list.

Throughout the years, Mark Dommen has worked at some of the most prestigious restaurants and developed his seasonal American flare of cooking. He began his career at Fleur de Lys in San Francisco, where he met his mentor, Chef Hubert Keller. Spending four years in New York working with Gray Kunz at Lespinasse and David Burke at Park Avenue Café. He was then sous chef for Chef Jean-Louis Palladin at Palladin and where he immersed himself in the French cuisine. Next, he was invited to be in Julia’s Kitchen in Napa Valley as the opening executive chef and while here, he was named one of Esquire magazine’s Best New Restaurants.

Mark Dommen changes his menu seasonally, and uses his French cooking techniques that he has learned from previous experiences. He is available for speaking engagements, cooking demonstrations and hosting.

To hire Mark Dommen for an endorsement, personal appearances, or book signing contact the experts at Celebrity Chef Network at booking@celebritychefnetwork.com  or 212-410-9879.