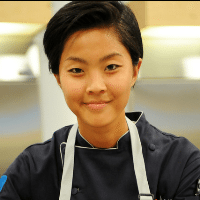 29-year-old Kristen Kish recently broke onto the celebrity chef scene after winning the tenth season of Top Chef: Seattle. Born in South Korea and adopted by an American family at just four months old, Kristen discovered her passion for cooking by age five.

As a former high-school model, Kristen traded in her flashy dresses for a chef’s apron, enrolling at Chicago’s Le Cordon Bleu culinary school to pursue her lifelong culinary dreams. After graduating in 2005, Kristen moved to Boston to work as a line cook at the Boston eatery, Top of the Hub, where she served for eighteen months.

Kristen’s big break came when renowned chef Barbara Lynch offered her an instructor position at Stir, Lynch’s culinary demonstration kitchen. During this time, Kristen undoubtedly impressed Barbara, who promoted her to chef de cuisine at both Stir and Menton, where she served until March of 2014.

Boston’s culinary culture provided other opportunities, too. Kristen spent some time working as chef de partie under Michelin-star chef Guy Martin at Sensing, his now-closed French restaurant. Kristen used this experience to develop her uniquely Italian-influenced French cuisine, which only added to her reputation, earning her a place on Top Chef: Seattle.

With style and expertise, Kristen thoroughly impressed Tom Colicchio and his fellow judges, but faced elimination in the eleventh round. In a stroke of luck, or perhaps strong-willed determination, Kristen narrowly escaped elimination, becoming the first cheftestant to win after facing Top Chef’s notorious “Last Chance Kitchen” and the second female winner. That season, Kristen bested Brooke Williamson, Sheldon Simeon, and Joshua Valentine to earn her title.

In the summer of 2014, Kristen was booked to take part in Top Chef at Sea aboard the Celebrity Infinity. Scheduled for departure in October, the cruise offers Kristen a chance to meet fans, entertain them, and maybe even whip them up something nice to eat.