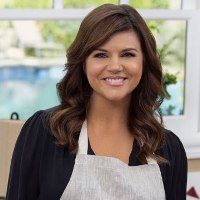 Celebrity Chef Speaker Tiffani Thiessen is an actress turned Celebrity Chef TV Host who is best known for her role as Kelly Kapowski on the classic teen sitcom Saved by the Bell. In 2014, the Cooking Channel announced Celebrity Chef Appearance by Tiffani would become the host of her own cooking show on the network called Dinner at Tiffani’s. Tiffani has always had a passion for cooking and knew that she eventually wanted to take her skills in the kitchen to the next level.

Tiffani won Miss Junior America and was named Cover Girl magazine’s Model of the Year in 1989 before taking what would become her career defining role as Kelly Kapowski on Saved by the Bell. She and a few of her Saved by the Bell cast mates were reunited in a skit on the Tonight Show with Jimmy Fallon in February of 2015. Following the success of the show, Tiffani was cast in a number of notable TV series including the teen drama Beverly Hills, 90210. It was in 2009 that Tiffani took on her memorable role as Elizabeth Burke in USA Network’s crime series White Collar. The show aired for 6 seasons and came to an end in December of 2014.

While filming White Collar, Tiffani made a Celebrity Chef Appearance as a judge on Food Network’s Cupcake Wars. The episode was themed “Birthday Bash” for Tiffani’s birthday.

Her exciting Cooking Channel series invites celebrities into her kitchen to her whip up a decadent dish. With guest appearances from her friends, family and past fellow cast members Mario Lopez and Elizabeth Berkley, Tiffani shares her tips on how to host intimate get-togethers with no stress. The first season aired at the beginning of 2014, with the second airing in early 2015. When Tiffani is not behind the scenes of her TV show, she’s teaming up with organizations such as Paleta: Farm to Table Meal Delivery, offering her fans deals on healthy foods and new lifestyles with the help of her culinary vision.