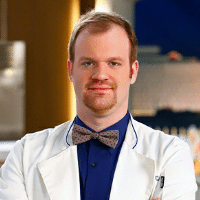 29-year-old American sous chef Ash Fulk first made a name for himself on the hit Bravo series Top Chef before becoming well-known for his personal twists on American comfort food. Ash entered into the culinary world at a young age and got his start in the kitchen at the W Hotel in San Diego, where he found himself inspired by regional cuisine. Taking the knowledge he’d gained, Ash worked with chef Katie Grebow to open Cafe Chloe in 2004, and served as the sous chef at the French-influenced burger joint.

Ready for a change of scenery, Ash then relocated to New York City to serve under Ralf Kreutel as the sous chef at the Trestle on Tenth. A new homestead meant new ingredients for Ash to experiment with, but he maintained his self-proclaimed motto: “If it grows together, it goes together.” With natural culinary talent, a rather eccentric personality and some kitchen theatrics, Ash quickly made a name for himself in the New York food world. In 2006, after having gained a respectable amount of fame for his knack for American comfort food, Ash was invited to appear as a cheftestant in the sixth season of Bravo’s hit cooking show, Top Chef: Las Vegas. That season Ash competed against a heavy list of future celebrity chefs including Michael and Bryan Voltaggio and Kevin Gillespie. Ash placed 9th out of a total of 17 cheftestants in the competition, and inspired audiences as the only gay man in the Top Chef kitchen.

Currently serving as chef de cuisine, Ash Fulk has concocted exquisite barbecue menus for Hill Country Barbecue Market at both their Manhattan and Brooklyn locations. The Hill Country Barbecue Market in Manhattan received two stars from the NY Times and has quickly become the local haunt for those in search of top-shelf barbecue. In the summer of 2014 Ash was booked to be a part of the Top Chefs at Sea celebrity cruise ventures.