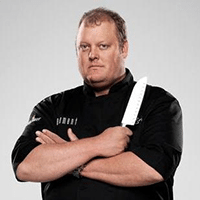 BIO: Beau MacMillan is the executive chef of Sanctuary on Camelback Mountain in Arizona. His belief is that food should not be overworked, but it should be simple and fresh. He uses only the freshest, local ingredients from farmers who produce organically.

Cooking in America’s most renowned kitchens, Beau MacMillan is a graduate of Johnson and Wales University. He began his cooking career at 16 years old when he held a position at Carne Brook Tea Room in Carver, Massachusetts. He has spent time under Chef Francois de Melogue and joined the team at La Vielle Maison in Boca Raton Florida, to eventually become sous chef.

Beau MacMillan packed up his things and headed to Los Angeles and became sous chef at the Hotel Bel Air, and later Shutters on the Beach in Santa Monica. Next, he was recruited to Arizona to develop the cuisine at The Ranch on Camelback, which became Sanctuary on Camelback Mountain. In 2001, Beau and former executive chef Charles Wiley opened elements restaurant, Camelback’s signature restaurant. As the executive chef of elements, Beau MacMillan brings natural elements, national recognition and acclaim.

He has been invited to The Food Network’s kitchen stadium to compete in Iron Chef America and cooked against Bobby Flay in “Battle American Kobe Beef” and in the end, Beau beat Bobby Flay. He has cooked at The James Beard House and at Bon Appetit Magazine in New York, and has cooking classes at Sanctuary. Beau is passionate about charity work and was recently named “Culinary Chef Extraordinaire” by a local nonprofit, Scottsdale League for the Arts, for his constant charitable donations to his community. Beau MacMillan is available for hosting, cooking demonstrations, and corporate hospitality.

To hire Beau MacMillan for an endorsement, personal appearances, or book signing contact the experts at Celebrity Chef Network at booking@celebritychefnetwork.com  or 212-410-9879.