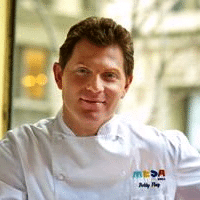 Bobby Flay first made his way to celebrity chef status when he became a partner owner in the Mesa Grill in 1992. The following year, he partnered with a colleague to open his first restaurant, Bolo Bar & Restaurant in the Flatiron District. These two restaurants earned him the James Beard Foundation’s Rising Star award in 1993. The New York Times awarded Bolo two stars in 1994 and continues to be voted the top Spanish restaurant in NYC by the Zagat Survey. Bobby Flay has opened several more restaurants in major casino cities like Las Vegas and Atlantic City, including the Mesa Grill, Bobby’s Burger Palace, and most notably, Bobby Flay Steak.

The Food Network quickly caught onto Bobby Flay’s appealing restaurants, and his television career was launched. Since starting with the Food Network, Bobby Flay has hosted twelve cooking shows, more than any other celebrity chef on the Food Network. Some of his more famous shows include “Throwdown with Bobby Flay”, “The Best Thing I Ever Ate”, and his most recent show, “Bobby’s Dinner Battle,” which aired in January 2013. As a New York Times Best Selling author, Bobby Flay shares his passion and enthusiasm for food in his cookbooks including “Boy Meets Grill” and “Bobby Flay’s Burgers, Fries and Shakes.” He has participated in and won the Iron Chef competition, a title that is earned only by famous names like Mario Batali and Masaharu Moritomo. Book the celebrity chef today, and you’ll get a taste of not only his restaurants, but a peak into behind the scenes cooking ideas that led to the success of his television shows.

Cooking demonstrations, endorsements, personal appearances, PR campaigns, speaking engagements, hire, book, we represent, contact, find celebrities, chefs and agents for Bobby Flay. If you want to find the representation, PR firm, marketing company, corporate consulting, speaking agent, to book or to hire Bobby Flay, Celebrity Chef Network is the agency of corporate consulting for your program. Our booking agents are the best in the business for consulting companies, agencies and universities in finding fees, availability and interest for celebrity chefs like Bobby Flay for any type of event, appearance, speaking engagement, endorsement, corporate event, motivational speech, PR campaigns, etc. Call Celebrity Chef Network at 212-410-9879 or email booking@celebritychefnetwork.com.  Our booking agents are here to help you hire your Celebrity Chef now.