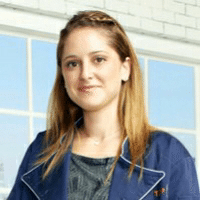 34-year-old Brooke Williamson earned a reputation in the kitchen following her close second place finish in the tenth season of Bravo’s culinary hit, Top Chef: Seattle. Brooke impressed Wolfgang Puck and the other celebrity judges with her ability to blend global flavors with local ingredients.

Currently, Brooke owns and operates Amuse Cafe, Hudson House, and The Tripel with Nick Roberts. In 2004, Brooke was nominated as one of the StarChefs.com Rising Star Chefs. Throughout her time in kitchen and her time spent as a cheftestant, Brooke certainly upheld this title.

At 19 years old, Brooke Williamson started her culinary career by working as a pastry assistant at the Argyle hotel. Chef Michael McCarty took an interest in Williamson and offered her a position at his Santa Monica restaurant, Michael’s, where she quickly became the restaurant’s youngest sous chef. In just two years’ time, Brooke had made quite an impression on the renowned chef. Michael offered Brooke an opportunity to serve as head chef at his French-influenced California eatery, Boxer.

Brooke attained a new level of fame when she became executive chef at Zax, revamping their menu and highlighting more local ingredients in the seasonal American cuisine. The Los Angeles Times and Forbes wrote about her tasty expertise, dubbing her a “culinary wunderkind.” During her time at Zax, Brooke also met Nick Roberts, her future husband and business partner.

During her time on Top Chef: Seattle, Brooke preformed quite well, winning three quickfire challenges during her close loss to Kristen Kish. In the summer of 2014, both Brooke and Kristen were asked to participate in the latest celebrity cruise, Top Chef at Sea. Brooke sets sail on the 15th of August, headed towards Alaska.