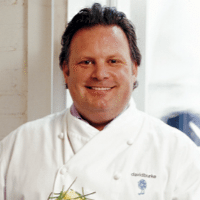 David Burke is one of the most prominent names in the American Culinary Industry.  He’s garnered the reputation as one of the most talented chef’s whose brand stretches from coast-to-coast.  As an esteemed restaurateur, Burke has established a group of restaurants that each have a unique style and feel.  David has based his career success on quality and presentation, which has allowed him to have a signature style in competitive food industry.

Celebrity Chef David Burke rose to national prominence in the early 1990’s as he began to gain recognition from others in the culinary community.  Burke began in the greater New York City area after being raised in New Jersey.  His mastery of the classic French Cuisine was recognized by even the most complex and experience pallets.  In 1992, Burke opened his first restaurant with Smith and Wollensky CEO Alan Stillman called Park Avenue Café.  He soon would take over as the VP of culinary development for the entire Smith and Wollensky restaurant group.  Burke continued to open new and manage more restaurants throughout the 1990’s and 2000’s.  The David Burke Group currently owns and operates 10 different restaurant venues.  Burke also has been a figure on the television screen appearing in the popular cable shows Iron Chef America and Top Chef Masters.

Due to his celebrity as an expert chef, Burke has also been hired as a consultant to hotels, cruises and food experts.  Burke has won numerous awards throughout his career including 1991 Chef of the Year (Chef’s of America) and 2013 Best Chef’s in America.  His food empire has been largely fueled by his innovative food techniques for which he even earned a patent for in 2011 for his use of Himalayan Pink Salt.  In terms of charity, The David Burke Group supports a number of organizations including The American Cancer Society and City Meals on Wheels.