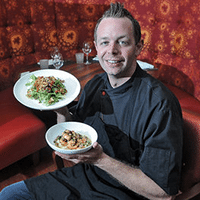 Does Virtual Events:
TV Show: No
Cookbook: No
Restaurant: No
Cuisine: Garden to Table
Fee Range: Under $10,000

BIO:  Celebrity Chef Ellis Cooley is an up and coming chef based in the tourism bureau of Cleveland’s world-class dining scene. Many tourists and locals ignore restaurants residing in hotels and in Ellis’ case, not only is it unfair–it’s unwise. A farm-to-table restaurant, Amp 150 replaced an old steakhouse in September of 2009, and after a $20 million makeover, it became a more appealing hotel restaurant. Executive Chef Ellis Cooley came from New York where he spent eight years at various restaurants before ending up at Amp 150. Ellis strives to use local foods and is commonly seen at local volunteer fund-raisers to support the local community.

Amp 150’s menu is described as contemporary American; its food is modern, original, clean and focused. The prices are moderately priced and split into sections for sharable items, small plates, entrees and sides. Because Ellis is concerned with using local products, the menu undergoes frequent tweaks with the latest produce that is in season.

Ellis is also involved in the Chef’s Garden project which is a leading grower of artisanal produce in the U.S. for the world’s top chefs. Chef’s Garden began over forty years ago at the Jones family farm in Huron, Ohio and sold products to local farmers’ markets. Chef’s Garden specializes in vegetables, micro greens, herbs and edible flowers with over 600 varieties. They continually drive to develop new products and to reintroduce heirlooms that have been lost over the generations. The main focus of Chef’s Garden is quality, freshness, taste and service, which is never compromised.

Ellis Cooley recently visited The Culinary Vegetable Institute in Milan Ohio where he served up dishes like velvet mushroom soup, charcuterie platter and slow roasted duck, all with ingredients from Chef’s Garden. Ellis also works with Dinner in the Dark, a non-profit organization he co-founded that brings together Cleveland’s top chefs every month to host a six-course dinner for guests who are “in the dark” about the evening’s menu until they arrive. To date, the dinner series has raised more than $25,000 from ticket sales for local charities, all of which are hand-selected by each month’s participating chefs.

Ellis is a big supporter of ‘going green’ and supporting any food that is local, he creates relationships with local farmers and strives to sustain those relationships and anytime he can use local produce, poultry, seafood, etc. he will.  Ellis has garnered a number of personal accolades as well, including being named a Rising Star Chef by Restaurant Hospitality magazine (2010), Best New Chef by Cleveland Scene Magazine (2010) and Champion of Sustainability by E4S, an economic development organization whose mission is to grow a sustainable regional economy (2010).

As of June 10, Ellis will be leaving Amp 150 in Cleveland and taking his talents to South Florida where he will be the food and beverage director for the West Palm Beach Marriot. He will also be participating at the Chef Jam at the Rock Hall. Celebrity Chef Ellis Cooley is available for endorsements, culinary consulting and cooking demonstrations.

To hire Ellis Cooley for an endorsement, personal appearances, or book signing contact the experts at Celebrity Chef Network at booking@celebritychefnetwork.com  or 212-410-9879.