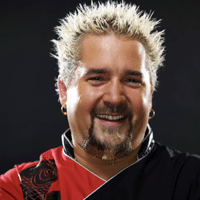 Guy Fieri, the “culinary rock star”, is known for his energetic personality, humor and culinary expertise. The debut of his first show, Guy’s Big Bite, on The Food Network was the catalyst for his successful culinary career. He is now the host of the top-rated television show Diners, Drive-Ins and Dives and the special series Tailgate Warriors. Guy Fieri is a guest judge on Food Network Star and collaborates with well-known Chef Rachael Ray in a competition series on Food Network called Rachael vs. Guy Celebrity Cook-Off. Rachael Ray has described the show as “the cooking equivalent to Dancing with the Stars” and the show has featured competitors such as Grammy winning rapper Coolio and Super Bowl MVP Hines Ward.

Guy is the owner of multiple restaurants such as Johnny Garlic’s and Tex Wasabi’s in California. He is the author of multiple New York Times best selling books and cookbooks including: Diners, Drive-Ins and Dives: An All-American Road Trip…with Recipes!, More Diners, Drive-Ins and Dives: Another Drop-Top Culinary Cruise Through America’s Finest and Funkiest Joints and Guy Fieri Food.

With his spiky, beach blond hair and likeable attitude Guy Fieri has been able to move out of just the culinary world and into prime-time television as he hosts NBC’s series Minute to Win It.