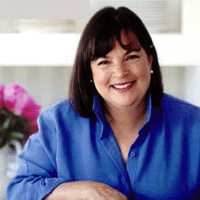 Celebrity chef, cookbook author and TV host Ina Garten has become a well-known Food Network personality after the wide success of her weekly cooking show Barefoot Contessa. Her work on the show that debuted in 2002 was awarded with 2 Daytime Emmy Awards in 2009 and 2010. She has penned her many brilliant recipes in a total of 9 cookbooks and most of them have peaked atop the New York Times Bestsellers list. With her wide popularity as a food personality, many forget Ina’s first major job was in the White House as a nuclear policy analyst under Presidents Gerald Ford and Jimmy Carter.

She began her culinary career by first purchasing a small specialty food store in the Hamptons and with no formal training she was able to teach herself about culinary arts with the help of French and English cookbooks. A few years later her store, Barefoot Contessa, became a 3,000 square foot food emporium. She hired cooks and employees to cook the food as well as help customers make their choices on specific food items. This then became the name of her Emmy Award winning Food Network program; Barefoot Contessa, which still currently airs on Food Network today. Prior to the debut of her own show, Ina gained TV experience and a host of fans as a frequent guest on Martha Stewart’s show also hosted by Food Network.

Ina’s cooking style follows a strict recipe of fresh ingredients and she is also very clever when it comes to shaving time off of meal preparations and cooking. Chef Ina also released a series of baking mixes, spices, sauces, and other flavor adding ingredients debuting in stores in 2006 entitled Barefoot Contessa Pantry. While recording her show, Ina has been a columnist for Martha Stewart’s magazine, O, the Oprah Winfrey’s O magazine, and House Beautiful magazine.