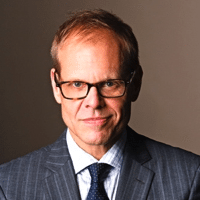 The quirky Alton Brown is a celebrity chef known for the way he intertwines history and science into his culinary expertise. He made his debut into the culinary world with his Food Network series Good Eats, an entertaining and informative cooking show that showcased Brown’s witty sense of humor and high level of intellect. Alton wrote, starred in and produced Good Eats. The show was a Peabody Award winner in 2007 and received a distinguished prize for excellence in broadcast news, education and entertainment. Food Network currently airs Good Eats sixteen times a week and it is now on its fifteenth season.

With the fame he received from his television show, Alton Brown released his first book, “I’m Just Here for the Food” in 2002. This book won a James Beard Foundation Award for Best Cookbook and was a New York Times bestseller. His other award winning books include “Alton Brown’s Gear for Your Kitchen”, and “I’m Just Here for More Food”, which was a New York Times Best Seller. His book “Feasting on Asphalt” was released in 2008 along with a TV mini-series that documented his motorcycle travel from New Orleans to the Mississippi River.

Alton most recently received the James Beard Award in 2011 for TV Food Personality/Host for Good Eats.