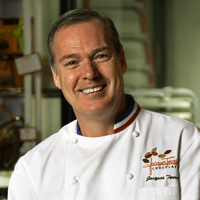 Celebrity speaker Jacques Torres, also known as Mr. Chocolate, is a master pastry chef.  Growing up in a young fishing village in the South of France, Torres began his culinary career at the age of 15 with an apprenticeship at a small pastry shop. The young Torres was a natural, completing the apprenticeship in two years and graduating at the top of his class. Following the completion of his apprenticeship, he began working with Michelin Star winning chef Jacques Maximum at the famed Hotel Negresco.  As if working at the prestigious hotel and alongside one of the best chefs in France wasn’t enough, Torres also attended culinary school to earn his Master Pastry Chef degree.  The rising pastry chef then continued his work around France, teaching courses at a culinary school in Cannes, and later becoming the youngest person to ever win the Meilleur Ouvrier Patissier de France competition, before eventually taking his craft across the Atlantic and to the United States.  Upon his arrival in the States, Torres became the Corporate Pastry Chef for the esteemed Ritz Carlton Hotel, and then moved on to work at one of New York’s most upscale French restaurants Le Cirque. He served as the Executive Pastry Chef at Le Cirque for 11 years and during these years, he also returned to his teaching roots and joined the faculty of the International Culinary Center. While on the staff, he designed the program’s Classic Pastry Arts Curriculum, and as a result became the school’s Dean of Pastry Arts. However, 2000 marked the year that Chef Torres officially became known as Mr. Chocolate, as he left Le Cirque in pursuit of bigger and better endeavors.  Feeling he had now garnered the experience, Jacques fulfilled a dream of his, and opened his own chocolate factory and retail shop in Brooklyn. The chocolate shop took off, and the chocolatier then proceeded to open six more Jacques Torres shops, including two more chocolate factories and one ice cream shop.

Celebrity Chef Jacques Torres has been the recipient of numerous accolades. Mr. Chocolate has won the James Beard Foundation Pastry Chef of the Year, the Chefs of America Pastry Chef of the Year and the Chartreuse Pastry Chef of the Year. In addition to his awards, he is the author of two Dessert Circus books and the host of his own Food Network TV show Chocolate with Jacques Torres. He has also participated in charity events. In May 2010, Torres with the help of fellow culinary talents Jacques Pepin, Alain Sailhac, and André Soltner, he prepared a $30,000-per-couple dinner for the U.S. President Barack Obama’s fund-raiser for the Democratic Congressional Campaign Committee. As of 2014, Jacques can also be seen alongside Buddy Valastro as one of the judges of TLC’s the Next Great Baker. Outside of the kitchen, chocolatier Torres, coincidentally, married chocolatier Hasty Khoei, who owns a chocolate shop, called Madame Chocolat, in Beverly Hills.