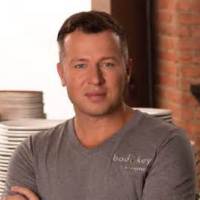 Celebrity Chef Guest Speaker Jason Roberts is a New Zealand native who has set up shop in New Jersey as a popular celebrity chef personality. Some of Jason’s best contributions as a culinary creative have come in the form of cookbooks. He is the author of 3 cookbooks Elements and Graze, Lots of Little Meals Fast and his most recent cookbook, Good Food Fast! published in 2014. He is currently working on the sequel, Good Food Fast 2, scheduled to release in 2015.

Jason has been surrounded by food his whole life. He spent the first few years of his culinary career cooking under mentor and renowned chef Damien Pignolet as Executive Chef of the restaurant Bistro Moncur in Sydney. His culinary talent did not go unnoticed and he soon became the host of the daily cooking program Fresh, which aired on TV in Australia and New Zealand.

Celebrity Chef Guest Speaker Jason got his first airtime in the U.S. when he appeared on Good Morning America to share his culinary journey in 2003.

Since then he also appeared on a number of other Talk shows such as The Sharon Osbourne Show, The Wayne Brady Show, The Style Network’s You’re Invited, and Talk Soap with Lisa Rinna among others. Finally Jason hosted his own talk show on PAX Network called Jason Roberts’ Taste. The show garnered two American Accolade Awards in 2005 for Best Host and Best Health & Lifestyle Program. In 2012, he joined fellow celebrity chefs Mario Batali, Michael Symon, Carla Hall as a correspondent for The Chew on ABC.

Celebrity Chef Guest Speaker Jason Roberts is an active supporter of OPAL, an enterprise founded in Australia that teaches families in underprivileged areas how to cook healthy foods and continues to advocate healthy living in everything that he does. He is also a celebrity spokesperson for Share Our Strength’s No Kid Hungry campaign advocating to end childhood hunger. In 2013, Celebrity Chef Guest Speaker Jason Roberts became the International Spokesperson for BODYKEY by NUTRILITE, a healthy living lifestyle program by Amway.