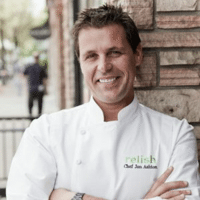 BIO: Growing up in his grandmother’s kitchen, Jon Ashton learned to love and appreciate his grandmother’s most important message; to share what one has with others. Jon is also an advocate for preventing childhood diabetes and helping to teach others on the importance of healthy eating.

After graduating from St. Helens College in Great Britain, he worked in numerous restaurants including the Derby Lodge and The Kirkfield Hotel. Jon Ashton began appearing on nationally syndicated TV shows to save up money, and flew to America to start a career in Florida. Once landed, he began producing and starring in his own local access TV shows and is currently the food correspondent of The Daily Buzz and the executive chef of Relish Magazine. Jon has been honored to have cooked for many famous celebrities and the list keeps growing; including Vince Vaughn, Seth Green, Paula Deen, Rachael Ray and Martha Stewart. Jon Ashton is available for speaking engagements, cooking demonstrations and hosting.

To hire Jon Ashton for an endorsement, personal appearances, or book signing contact the experts at Celebrity Chef Network at booking@celebritychefnetwork.com  or 212-410-9879.