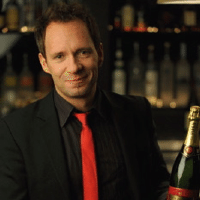 Celebrity chef speaker Kevin Brauch, also known as the “celebrity bartender” is best known for his work hosting the shows The Thirsty Traveler on the Fine Living Network, MegaWorld on Discovery Channel Canada, and Superstar Chef Challenge on Food Network Canada.  To add to his repertoire, he is also the floor reporter for Iron Chef America, and is set to host the upcoming Food Network Canada program CheF*Off. But before his rise to fame, the Toronto native was just a bartender trying to work his way through Ryerson University’s radio and television program.  His first gig came in 1988 working for CFNY radio in his hometown of Toronto. After two years at the radio station, he made the move to television landing a job at TVOKids in 1994, where he played an innovative role in the creation of television programs The Space, Stuff, and Off the Hook. During his time at TVOKids he earned Canadian Gemini awards in 1998 for Best Performance in a Children’s or Youth Program for the show Stuff, and in 1999 for Beset Host in a Lifestyle or Performing Arts Program for the show Canadian Gardening Television. He won yet another Gemini award in 2005 for Beset Host in a Lifestyle/Practical Information or Performing Arts Program or Series for, perhaps his most popular show The Thirsty Traveler.  His talents hosting lifestyle shows even peaked the interest of Jay Leno, and Brauch was invited to appear on The Tonight Show with Jay Leno in 2006.

Off-the camera, the thirsty traveler enjoys writing comedy and is known to be an avid ice hockey player, mountain biker, and triathlon competitor. Brauch is also of course, considering as he spent years as a bartender and hosts a show about drinking, a beer connoisseur and a fan of imported beers. When he’s not working, there’s a good chance he can be found at a pub enjoying a drink and cheering on his favorite sports team Arsenal F.C. in a football match.