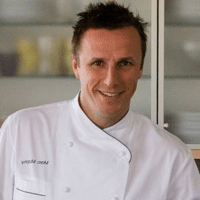 BIO: Marc Murphy grew up living in many different locations around the world, all to which he contributes to his excellent learning of French and Italian cuisine. This experience helped grow his love and passion for the world of cooking.

Marc followed his brother to Peter Kump’s New York Cooking School (now the Institute of Culinary Education), and apprenticed in restaurants all over France and Italy. He returned to New York and became the line cook at Terrance Brennan’s Prix Fixe where he stayed for almost 2 years and worked his way through every position in the kitchen. Here, he formed a bond with sous chef Joseph Fortunato and David Pasternak.

With his passion on his sleeve, he returned to Europe with the Michelin Red Guide in his hand and began knocking on the doors of Paris’ most elite restaurants. Finally, he received a position at Le Miraville. After one year, Marc Murphy staged at the Louis XV in Monte Carlo, and caught the attention of executive chef Alain Ducasse. Alain was so impressed with his skills that he made arrangement for Marc Murphy to work with Sylvain Portay at Le Cirque upon returning to the U.S.

After Le Cirque, he began work as the sous chef at Layla, Drew Nieporent’s Middle Eastern fantasy in TriBeCa. When Joe Baum was opening Cellar in the Sky at Windows on the World, Joe recruited Marc to serve as executive chef where he received two stars from the New York Times.

In 2004, Marc Murphy went solo to open Landmarc [Tribeca], and won rave reviews for its French and Italian menu and the highly contemporary wine list. He is now the executive chef and owner of all the restaurants in The Anvil NY Group, which include3s Landmarc and Ditch Plains. He is a regular judge on The Food Network’s hit, CHOPPED and has appeared on Iron Chef America, Hot Chefs, The Martha Stewart Show, Make My Day and The Today Show. Marc Murphy is the Vice President of the Manhattan chapter of the New York State Restaurant Association, a member of City Harvest’s Food Council and on the Advisory Board of Culintro, Passport NYC and the Institute of Culinary Education. He is available for speaking engagements, personal appearances and hosting.

To hire Marc Murphy for an endorsement, personal appearances, or book signing contact the experts at Celebrity Chef Network at booking@celebritychefnetwork.com  or 212-410-9879.