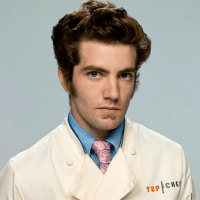 Known for incorporating molecular gastronomy into his cooking, Marcel Vigneron will again be utilizing his trademark culinary style August 6 against Richard Blais on Top Chef Duels. This will not be his first time on Top Chef though; he was actually the runner-up of the competition during its second season in 2006, during which time he was also developing his talents as the Master Cook at Joël Robuchon in Las Vegas. After placing behind Ilan Hall in 2006, he eventually went on to become the Executive Sous Chef at The Bazaar in the SLS Hotel in Beverley Hills in 2008. Two years later, Vigneron achieved his own reality television show on the Syfy network entitled Marcel’s Quantum Kitchen, which followed Vigneron and his crew as they tried to meet the substantial demands of their clients using Vigneron’s innovative and unique culinary technique.

Although Vigneron’s show only lasted six episodes, he was very successful as a guest on numerous other cooking shows. In 2011 he returned to the Top Chef series on Top Chef: All-Stars, in which he was eventually eliminated after the Restaurant Wars challenge. Returning to the television screen again in 2012 as a contestant on The Next Iron Chef: Redemption, Vigneron was able to make it to the final four of the competition before being eliminated. The next year, he made an appearance in Iron Chef America with Spike Mendelsohn, facing off against Iron Chefs Geoffrey Zakarian and Alex Guarnaschelli in a special Halloween edition of the series. More recently in 2014, he appeared on the NBC show Food Fighters, in which he competed against Elisha Joyce and won.

An eclectic celebrity chef speaker with a knack for incorporating the science of molecular gastronomy into his dishes, Vigneron is a young chef with the talent to take him very far in the culinary industry.