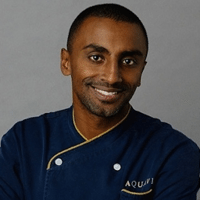 BIO: Celebrity Chef Marcus Samuelsson is one of the most highly regarded chefs in New York City, and in the entire world. He is the chef and co-owner of the wildly popular Aquavit restaurant in New York City and C-House Restaurant in Chicago. Samuelsson is well known for his eclectic culinary style that combines flavors and techniques from Sweden, Africa and Japan, as well as his many TV appearances. Chef Samuelsson has appeared on Food Network as a judge for its hit TV show Chopped, competed on Iron Chef America, taped demos for the Today Show, and was the winner of Bravo’s critically acclaimed Top Chef Masters competition.

Marcus Samuelsson was originally born in Ethiopia, but grew up to foster parents in Sweden. He became interested in cooking because of his maternal grandmother in Sweden, and studied at the Culinary Institue in Gothenburg. He apprenticed in Switzerland and Austria, and came to the United States in 1991 to work as an apprentice at Aquavit. Once at Aquavit, Chef Samuelsson soon became the restaurant’s executive chef. Samuelsson was only 24 at the time of his promotion. Soon after, he received a three-star restaurant review form the New York Times. Chef Samuelsson’s career was just getting started and in 2003 he was named “Best Chef: New York City” by the James Bear Foundation, an extremely prestigious award.

In addition to his recognition and work as a restaurant chef, Samuelsson is a Visiting Professor of International Culinary Science at the Umeå University in Sweden. As mentioned, Samuelsson is widely known for his television work and even hosted his own show, Inner Chef, which aired in 2005. A final accomplishment of note of Chef Samuelsson is that he served as guest chef for the state dinner of the Barack Obama presidency in 2009. Chef Samuelsson’s menu included red lentil soup, roasted potato dumplings, and green curry prawns. For the event, which was held in honor of India and the country’s prime minister, Samuelsson utilized fresh ingredients from the White House Garden. Celebrity Chef Stefan Richter is available for speaking engagements, endorsements, and cooking demonstrations.

BOOKS: The Soul of a New Cuisine: A Discovery of the Foods and Flavors of Africa, New American Table, Aquavit: And the New Scandinavian Cuisine, Discovery of A Continent – Foods, Flavors, and Inspirations From Africa

To hire Marcus Samuelsson for an endorsement, personal appearances, or book signing contact the experts at Celebrity Chef Network at booking@celebritychefnetwork.com  or 212-410-9879.