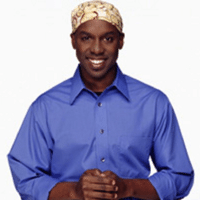 BIO: As an Emmy Award nominated television host, chef and author Marvin Woods, is best well known for his signature bandana and his take on the food rooted in northern Africa, South American the Caribbean and the United States Low Country. His cooking has been featured in O Magazine, Food & Wine, Southern Living and many more.

Alongside Michelle Obama and the Let’s Move! initiative, Marvin Woods was chosen as the first chef to kick off the Let’s Move! cooking series where he helped families create nutritious and affordable meals. Droppin’ Knowledge with Chef Marvin Woods is his program to help educated and motivate kids and parents to eat right and stay healthy while fighting childhood obesity.

Marvin Woods is the executive chef and partner of a new fast-casual restaurant called FunXion in Washington, DC. With a menu serving American favorites like pizza, tacos and burgers, Marvin adds a healthy twist by using at least one Superfood ingredient. All foods are made without any oil, grain of salt or added sugar. His philosophy is that food can be prepared in a whole and healthy way without the sacrifice of enjoyment and flavor.

Marvin Woods loves to do guest appearances and cooking demonstrations and has been featured as a celebrity chef at The Pillsbury Bake Off, the Miami Wine & Food Festival, and Charlotte Shout and has been a judge for the nationwide Southern Living Cook Off.

As the host of Home Plate on the Turner South network for 4 seasons, he attracted more than 7.2 million viewers until the network was acquired by Fox Sports. This show was the inspiration of Marvin’s second cookbook, Home Plate Cooking. Currently, he is working on a line of spice blends and sauces, travels the country with the American Heart Association and other health oriented organizations. Marvin Woods is available for speaking engagements, corporate appearances and cooking demonstrations.

To hire Marvin Woods for an endorsement, personal appearances, or book signing contact the experts at Celebrity Chef Network at booking@celebritychefnetwork.com  or 212-410-9879.