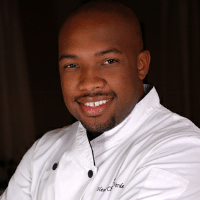 Rahman “Rock” Harper won the third season of the Fox reality television show Hell’s Kitchen, hosted by Gordon Ramsey, taking away the grand prize of an executive chef position at Terra Verde at Green Valley Ranch in front of almost ten million viewers, the most the series had ever seen. Celebrity Chef Speaker Rock impressed Ramsay and audiences tuning in with his confidence, along with his leadership and motivational abilities in the kitchen. Since winning the Hell’s Kitchen, he has made several return guest appearances and to face off with former competitors from different seasons. Without a doubt Rock is a fierce competitor—in 2013, he was the winner of the Food Network show Chef Wanted with Anne Burrell.

In 2010, Rock’s cookbook, 44 Things Parents Should Know about Healthy Cooking for Kids, was published. This user friendly cookbook is every parent’s dream resource on teaching their kids how to make good food choices on their own, as well as a guide to finding healthy substitutes and making cooking inexpensive and interactive.

The married father of three also gives back to the community; he is a board member, the director of kitchen operations, and a culinary instructor in the job training program for the DC Central Kitchen, an organization that aims to build community, reduce hunger, and rebuild urban food systems through providing healthy meals; DC Central Kitchen is also where Rock met his future business partner, Aaron Gordon, with whom he opened his signature sausage restaurant Fatshorty’s Sausage Grill in Virginia. Although Rock has cooked at some of the snazziest restaurants in the country, like the Carlyle Club, Ben’s Next Door, and BET on Jazz, the celebrity chef feels most at home mincing and chopping at DC Central Kitchen. Since 2008, he also been the National Celebrity Chef for the national nonprofit organization March of Dimes, which promotes health and wellness for new and expecting mothers and their babies.