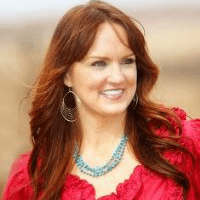 Ann Marie Drummond, also known as Ree Drummond is one of the few bloggers that has made a name for herself simply through blogging. She grew up in Oklahoma, and first began blogging on her website, thepioneerwoman.com, back in 2006. Her blog became insanely popular with women around the world, and by 2009, she was receiving more than 13 million page views on a monthly basis. Just before that mark, she launched a cooking section of her blog with a giveaway contest. Her giveaway was so well received that she launched a simple website for recipes. Today, that blog is one of the most popular recipe websites in the world.

The popularity of her websites led to two cookbooks over three years, both part of a series called “The Pioneer Woman Cooks”. Both books have received top reviews on sites like Amazon, and her second book became a New York Times Bestseller.

In April of 2011, Ree Drummond was invited to a cooking showdown with celebrity chef Bobby Flay. Shortly following the episode, Ree Drummond was given her own show on the Food Network, called Pioneer Woman, which debuted in August of 2011. Get a feel for the recipes that have made Ree a success when you hire her for your next special event.