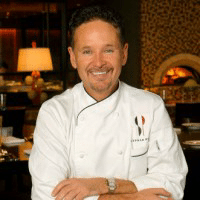 BIO: Esquire Magazines Chef of the Year for 2006, Stephan Pyles is the chef and owner of Stephan Pyles Concepts. Stephan is a pioneer of New American cooking and is the founding father of Southwestern Cuisine. With over 15 restaurants in four cities under his belt including Routh Street Café, Baby Routh, and Star Canyon Texas Monthly named his restaurant, Stephan Pyles, the Best New Restaurant in Texas.

His second Arts District restaurant opened in 2009, Samar by Stephen Pyles, serving “International Plates” which was inspired by his travels to India, Spain and the Eastern Mediterranean. The restaurant has been named Best New Restaurant—2009 by The Dallas Morning News. The author of four cookbooks, Stephan has hosted an Emmy-award winning and nationally syndicated PBS TV series called New Tastes from Texas. Stephan is a cuisine consultant for American Airlines and The Dallas Museum of Art. He has developed restaurants for Hotel ZaZa and The Gaylord Texan in Dallas and is creating a restaurant, food and beverage program for Eilan Hotel and Spa. He has also cooked for four American presidents, Queen Elizabeth and numerous heads of state and movie stars.

Stephan Pyles has accumulated several awards including the AAA Five Diamond Award; Nation’s Restaurant News’ Fine Dining Hall of Fame Award Restaurants and Institutions’, and the Ivy Award and the American Academy of Achievement Award. Winning the James Beard Award for Best Chef, he is the first person from the Southwest to win the award, the first Texan inducted into Who’s Who of Food and Wine in America, and finally Outstanding Restaurateur of the Year by Minnesota Restaurant Association and Texas Restaurant Association.

Named, Humanitarian of the Year Award from Share Our Strength, named one of the 20 most influential Texans by Texas Monthly. Stephan is a founding board member of Share Our Strength—America’s largest private source of funding for hunger-relief, a board member of The North Texas Food Bank and co-founder of The Dallas Hunger Link, Dallas’s perishable food program. He founded Taste of the Nation and has raised over $2 million for hunger relief focusing on children. For year, he offered a $15,000 annual scholarship in his name to a rising star culinary student in Texas. Stephan Pyles is available for speaking engagements, hosting and endorsements.

To hire Stephan Pyles for an endorsement, personal appearances, or book signing contact the experts at Celebrity Chef Network at booking@celebritychefnetwork.com  or 212-410-9879.