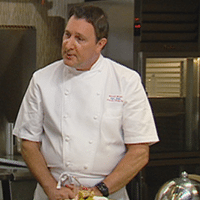 Does Virtual Events:
TV Show: No
Cookbook: No
Restaurant: No
Cuisine: Desserts and Pastry
Fee Range: Under $10,000

BIO: Steve Evetts is the executive pastry chef to one of New York City’s largest hotels with five restaurants and over 100,000 square feet of banquet space. Steve, along with team of 21 esteemed pastry chefs, work around the clock providing guests with the best in specialty desserts and pastries.

After leaving school at the age of 15, he went to work the very next day in culinary work and eventually completed a four year apprenticeship at a local four star hotel, Leamington Spa. During his time at Leamington Spa, he became captivated with the finer art of pastry. Steve continued his work at hotels around England, and also had the opportunity to work for the Royal Family for 3 years.

He left Great Britain for Toronto, Canada, and began work at the Four Seasons hotel. While here, he became very interested in teaching, and began working in London, Ontario where he had the opportunity to educate students and helped them enter into national and international culinary competitions. Over the next five years, he worked for a specialty dessert company in Toronto, Canada and in 2000 he received an invite from George McNeill to become the executive pastry chef at New York Marriott Marquis hotel.

Steve Evetts’ dessert recipes and photos have been published in various media outlets such as Pastry Arts and Design, his chocolate Passion Raviloi with Ricotta Souffle Fritter was featured in Giada Di Laurentiis’ Food Network program, Behind the Bash. He has won four gold medals at the VKD World Culinary Olympics. Currently Steve Evetts, is pursuing a Certification in Master of Pastry Chef through the American Culinary Federation. He was just voted one of the top ten pastry chefs in America bye Dessert Professional magazine Guest Celebrity Chef—Noah Carroll. Steve is available for cooking demonstrations, hosting and corporate hospitality.

To hire Steve Evetts for an endorsement, personal appearances, or book signing contact the experts at Celebrity Chef Network at booking@celebritychefnetwork.com  or 212-410-9879