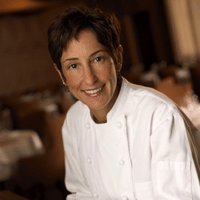 Chef Suzanne Tracht has known she wanted to be a chef since she was a teenager.  She worked alongside many famous chefs for years before pursuing her dreams of opening her own restaurant in 2001 when she opened Jar, a steakhouse in Los Angeles. What sets Jar apart from other steakhouses is the way it bases its menu on the seasons, which most traditional steakhouses do not. In 2002, Food and Wine magazine named Celebrity Chef Tracht as one of the Best New Chefs of the year. In addition, Jar has been named among Los Angeles’ top 75 restaurants by Los Angeles magazine’s restaurant issue several times.

In 2007, Chef Tracht opened her second restaurant, Tracht’s, at the Renaissance Hotel Long Beach. In addition to receiving remarkable reviews in the Los Angeles Times and Orange County Register, Tracht’s was named among the top new restaurants in 2007 by Citysearch. That same year, Suzanne Tracht was inducted into the Fine Dining Hall of Fame by Nation’s Restaurant News.