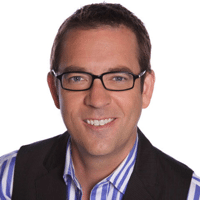 Writer, cookbook author and television personality Ted Allen began his career as the food and wine connoisseur on the American Bravo Network’s television program Queer Eye for the Straight Guy.  He was also hired as a judge on Bravo’s Top Chef before leaving Bravo to host several shows on the Food Network, including Food Detectives, Iron Chef America, and Chopped. Known as the face of the television series, Ted Allen received a James Beard Award for his work as the host of Chopped in 2012.

Ted Allen regularly gets booked/hired to make guest appearances on other television cooking shows, such as The Best Thing I Ever Ate, Paula’s Party, and The Next Food Network Star with other celebrity chef superstars like Bobby Flay, Paula Deen, and Rachael Ray. In addition to his notoriety as a television personality, Ted Allen has also received notable recognition for his writing. Allen wrote New York Times Best-Seller Queer Eye for the Straight Guy: The Fab Five’s Guide to Looking Better, Cooking Better, Dressing Better, Behaving Better, and Living Better. He also writes for Esquire magazine, Food Network Magazine, and Bon Appétit.

Celebrity Chef Ted Allen also gives back to the community as much as possible. As the National Spokesperson for Dining Out for Life six years running, Ted participates in the annual fundraiser which brings together more than 3,000 restaurants to donate a portion of the day’s proceeds to local AIDS service organizations.