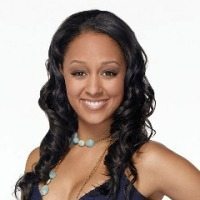 Celebrity Chef Tia Mowry is no stranger to success as an actress and TV star, but she is a newcomer in the culinary world. Tia rose to fame as a teenager staring in the hit show Sister, Sister on ABC/WB with her identical twin sister Tamera Mowry. Following the show’s overwhelming success, Tia went on to star as medical student Melanie Barnett Davis on the popular BET series, The Game. Since 2013, Tia has starred as food blogger and full-time stepmom Stephanie Phillips in the Nickelodeon series Instant Mom. In 2015, Tia announced her own cooking show titled Tia Mowry at Home that airs on The Cooking Channel.

Her cooking show gives viewers a more personal look into the life of a full-time mom, actress and wife. Celebrity Chef Tia Mowry grew up in a military family that was constantly on the move, which allowed her to taste a variety of foods in different cities. She credits those influences for sparking her interest in cooking homemade meals for her family. She hopes to showcase meals that are healthy, delicious and easy for moms on-the-go because she knows first-hand how hard juggling a career and family can be.

In addition to her celebrated TV shows, Tia and sister Tamara starred in the Disney Channel original movie Twitches and the sequel Twitches Too. In 2011, Tia and Tamara began filming their new reality TV series Tia & Tamara which aired on the Style Network. The show followed the lives of the twins including Tia’s pregnancy and Tamara’s upcoming wedding to Fox News Correspondent Adam Housley.

Celebrity Chef Tia Mowry has also become one of our favorite celebrity moms in Hollywood. She wrote an exciting book about her first pregnancy titled Oh Baby!: Pregnancy tales and Advice from One Hot Mama to Another. The book detailed the trials, tribulations and triumphs of pregnancy for working mothers.

Celebrity Chef Tia Mowry is one of several well-known celebrity personalities including Haylie Duff and Tiffani Thiessen who have found a new TV home on the Cooking Channel.