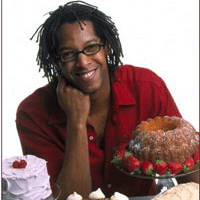 Once Chef Warren Brown realized his love for cakes, he left his career as a lawyer to pursue his aspirations of becoming a baker.  Using his entrepreneurial spirit and background in business, Celebrity Chef Warren Brown started off as a small local business owner and achieved global fame by turning his passion for baking into a profitable business enterprise. He founded CakeLove bakery in 2002 and Love Café in 2003 and now owns seven bakeries in the Washington, DC metropolitan area.

Brown has received a lot of recognition for his inspirational success, from being chosen as one of small business magazine Inc.’s 26 Most Fascinating Entrepreneurs in 2005 to appearing in People Magazine’s 50 Most Eligible Bachelors of America in 2001.

He has also been recognized by many different local and national media outlets.  He has been booked by television shows like The Oprah Winfrey Show, the Today Show, CNN and Dateline, has been featured in magazines and newspapers such as the Washington Post, the Washington Times and Southern Living, and has made radio appearances on radio shows like the Martha Stewart Living Today show.