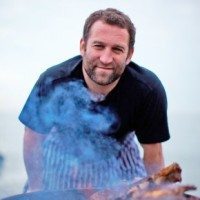 Celebrity Chef Adam Perry Lang is a New York City-based chef specializing in mouthwatering barbecue cuisine. After an early career spent learning classical French techniques, Adam followed his heart to become one of the most respected BBQ chefs in the United States. He has made Celebrity Chef appearances on a variety of news programs and talk shows including Good Morning America, The Oprah Winfrey Show, The Today Show and Fox & Friends.

Adam graduated from the Culinary Institute of America and worked at several notable establishments in his early career including revered Celebrity Chef Daniel Boulud’s Le Cirque and Daniel located in NYC. He also spent some time in France working at Restaurant Guy Savoy. By this time Adam had mastered the art of classic French techniques, but his heart was full of smoke. Barbeque smoke that is.

The food scene in New York City lacked a really great rib shack and Celebrity Chef Adam Perry Lang decided to fill the void with his own BBQ hotspot. Daisy May’s BBQ started with a few food carts strategically placed around the city and has grown into a flagship location in Midtown Manhattan. But in the barbecue world, you earn your stripes at annual competitions. In his first year on the competition circuit, Adam cooked his way to Grand Champion honors at the World Pork Expo and won 1st place for his delectable pork shoulder at The World Series of BBQ in Kansas City. Adam has also taken his barbecue methods global, opening up Barbecoa with fellow celebrity chef Jamie Oliver in London.

In 2009, Celebrity Chef Adam Perry Lang released his first cookbook titled Serious Barbecue: Smoke, Char, Baste and Brush Your Way to Great Outdoor Cooking. The book provided backyard chefs with his secrets to spicing up any backyard BBQ. He has since published 2 more books titled Charred and Scruffed: Bold New Techniques for Explosive Flavor On and Off the Grill and BBQ 25: The World’s Most Flavorful Recipes-Now Made Fool-Proof.