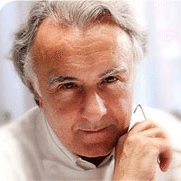 BIO: Alain Ducasse’s first apprenticeship began at the Pavillon Landais restaurant in Soustons and at the Bordeaux hotel school. Soon after, he began work at Michel Guerard’s, Eugenie-les-Bains while also working at Gaston Lenotre. While at Moulin de Mougins, Alain learned the Provencal cooking methods which he is now known for.

His first chef position was in 1980 when he took over the kitchens at L’Amandier in Eugene Mougin. In 1981, Alain Ducasse became head chef at La Terrasse in the Hotel Juana in Juan-les-Pins and was later awarded two stars in the Red Guide.

As the Chef des Cuisines at the Hotel de Paris in Monte Carlo, he managed the hotel’s high end Le Louis XV restaurant and after three years, Louis XV became the first hotel restaurant to be awarded three stars in the Red Guide. In 1995, Alain Ducasse went beyond the restaurant business and opened La Bastide de Moustiers. In 1996, he opened the Alain Ducasse restaurant in Le Parc—Sofitel Demeure Hotels in the 16th district of Paris, France.

Alain Ducasse made his way to the States and opened the Alain Ducasse restaurant in the New York City Essex house and here was also a recipient of the Red Guide’s three stars, and three of Alain’s restaurants are Michelin star winners. Among his accomplishments outside of the kitchen, he has opened a cooking school for the general public in Paris and another for chefs (ADF), and worked for the European Space Agency to develop better astronaut meals for space. Alain is available for cooking demonstrations, corporate appearances and endorsements.

To hire Alain Ducasse for an endorsement, personal appearances, or book signing contact the experts at Celebrity Chef Network at booking@celebritychefnetwork.com  or 212-410-9879.