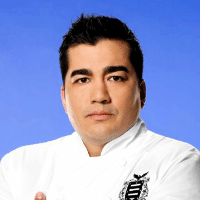 Jose Garces opened his first restaurant in 2005 and has been on a whirlwind adventure through the culinary world ever since starring on TV, opening more signature restaurants and winning some of the industry’s most coveted awards. Specializing in Latin American cuisine, Celebrity Chef Jose won the 2nd season of Food Network’s series The Next Iron Chef and defeating Bobby Flay as a challenger in his first Iron Chef America appearance in 2008. He has won 16 times in the Kitchen Stadium including defeating Masaharu Morimoto in the Tournament of Champions. The following year the talented chef would win the James Beard Foundation “Best Chef Mid-Atlantic” Award and solidify himself as one of the best chefs on the entire east coast.

Jose developed his cooking skills through a steady diet of classic recipes that had been passed down from his Ecuadorian family and he honed his skills in top restaurants in Spain and New York City before settling in Philadelphia. It was then that the chef would launch his restaurant company Garces Group which now owns and operates restaurants in Jose’s hometown of Chicago, Illinois, Philadelphia, PA, Scottsdale, AZ, Palm Springs, CZ and Atlantic City, NJ. Jose purchased a 40-acre farm in Bucks County, PA to grow and cultivate his own produce to ensure only the freshest and finest quality produce is being provided at his east coast restaurant locations.

Aside from his sit-down restaurants, Jose and his company also operate food trucks and a full-blown catering service that designs and services functions for businesses, weddings, and black-tie affairs. Jose has recorded his culinary creations and industry experience in 2 cookbooks entitled Latin Evolution in 2008 and The Latin Road Home in 2012. Both cookbooks shed light on the rise of Latin fusion and other country’s influence on the American culinary scene.