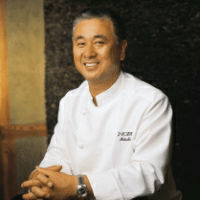 BIO: Nobuyuki Matsuhisa began is cooking career after graduating from high school at Matsue Sushi in Shinjuki, Tokyo. After working here for seven years, Nobuyuki was invited by a Peruvian entrepreneur to help him open a Japanese restaurant in Peru. At 24, he moved to Peru and opened a restaurant. Not realizing all of the ingredients he took for granted in Tokyo, he found himself improvising with techniques, he developed his unique style of cuisine incorporating Southern American ingredients and Japanese delicacies.

To hire Nobuyuki Matsuhisa for an endorsement, personal appearances, or book signing contact the experts at Celebrity Chef Network at booking@celebritychefnetwork.com  or 212-410-9879.