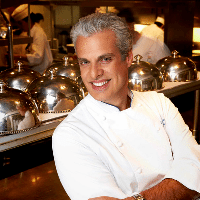 French chef, author, and TV personality Eric Ripert is renowned in the culinary world for his delectable French cuisine and seafood dishes. He currently co-owns and operates the restaurant La Bernardin in New York City, the #18 restaurant on the S. Pellegrino World’s 50 Best Restaurants list. New York Times has given the restaurant 4 stars for the last 2 decades and it was awarded 3 stars from the Michelin Guide. He also owns 3 restaurants in conjunction with the Ritz Carlton the restaurant Blue located at the Ritz Carlton Grand Cayman in the Cayman Islands, Westend bistro in Washington, DC and 10 Arts Bistro in Philadelphia.

Celebrity Chef Speaker Eric became the executive chef of La Bernardin in 1994 and the restaurant as well as Eric are well known for their superb seafood dishes. While operating the restaurant Eric also serves as the chairman of the City Harvest Food Council that raises money and joins with community food operations to provide food for those going hungry and living in poverty in New York City. Eric has made appearances on multiple TV shows including guest judge on Bravo’s Top Chef, as well as appearing in his good friend Anthony Bourdain’s travel and food show on the Travel channel, No Reservations. Eric’s own PBS TV show Avec Eric began airing in 2009 and follows him around the world to find inspiration and cook new and exciting dishes from around the world.

After opening Blue in the Cayman Islands, Eric decided to start hosting his annual Cayman Cookout that invites the world’s top chefs to the Ritz Carlton Grand Cayman and surrounding attractions for a weekend culinary spectacular.  Fans of the celebrity chefs can get tickets and have a chance to mingle with the chefs during a weekend full of cooking demonstrations, tastings, and seminars.