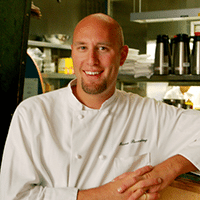 BIO: Hosea Rosenberg was the winner of the fifth season of Bravo’s Top Chef. Originally from Taos, New Mexico, Hosea originally pursued an engineering physics degree at the University of Colorado in Boulder but eventually decided to change careers after working at several restaurants while in school. Be began working at the Big Red F Restaurant Group prior to his sous chef position at Zolo Southwestern Grill. He works closely with many of the local farmers in Colorado and supports sustainable foods, conservation and buys local and orgainic whenever possible.

He has also worked for Wolfgang Puck, then became executive chef for Jax Fish House where he earned numerous awards such as, Best Chef honors from the Denver International Wine Festival and a seven-time, undefeated winner of the Flatiron Chef Competition.

On Top Chef, Hosea Rosenberg beat fellow contestants Carla Hall and Stefan Richter and since he has been traveling to share his experience and cooking expertise. In 2010, he and Laura Rice partnered to star StrEat Chefs. Hosea Rosenberg is available for speaking engagements, hosting and endorsements.

To hire Hosea Rosenberg for an endorsement, personal appearances, or book signing contact the experts at Celebrity Chef Network at booking@celebritychefnetwork.com  or 212-410-9879.