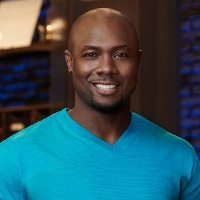 Celebrity Chef Eddie Jackson is a former NFL football player turned Celebrity Chef who was the winner of season 11 of the Food Network cooking competition series Food Network Star in 2015. Eddie beat out 12 other celebrity chef hopefuls and will now have his own cooking series on the Food Network. His pilot BBQ Blitz, aired during the finale of Food Network Star will serve as the basis for his new show centered around barbeque. Also a personal trainer and bodybuilder, Eddie prides himself on creating healthy, nutritious dishes that can help others life a healthier lifestyle without sacrificing the flavors they love.

Celebrity Chef Eddie Jackson was a standout defensive back for the University of Arkansas. He was signed as an undrafted free agent by the Carolina Panthers in 2004. He spent the 2005 and 2006 seasons with the Miami Dolphins before suffering a torn ACL. The New England Patriots scooped him up out of free agency before the 2007 season. Again injuries would keep him from the field and he ended his professional football career with the Washington Redskins in 2008.

As a pro athlete, Eddie had always been big into fitness and eating healthy so he saw an opportunity to start a new career helping others live a healthier lifestyle. His appearance on Food Network Star was not his first crack at TV cooking competition series. Eddie came in 8th place out of 19 talented contestants in season 4 of Gordon Ramsay’s MasterChef on Fox. In addition to his new gig with Food Network, Celebrity Chef Eddie Jackson currently owns and operates his own popular food truck in Houston called the Caribbean Grill.