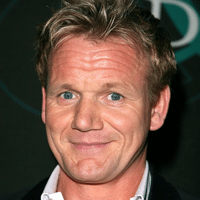 Known for his intense passion, Celebrity Chef Gordon Ramsay is a world-renowned restaurateur, writer and television star. He has studied under some of the world’s leading chefs such as Guy Savoy, Albert Roux and Marco Pierre White.  He currently has 30 restaurants across The United Kingdom, The United States, France, Italy, Ireland, Qatar and Japan. Throughout his career he has received 15 Michelin stars. His first wholly owned restaurant in London, Restaurant Gordon Ramsay, has held three Michelin stars for the longest-running time ever.  In 2006, he received an Order of the British Empire by Queen Elizabeth II for his service to the industry.

Ramsay stars in three top-rated TV shows on Fox: Kitchen Nightmares, Hell’s Kitchen, and MasterChef, which he hosts along with other celebrity chefs such as Graham Elliot and Joe Bastianich. Hell’s Kitchen has produced celebrity chef winners like Danny Veltri, Christina Machamer and Dave Levey. His expertise in hotel management has spawned his newest television project, Hotel Hell, which debuted in the summer of 2012.