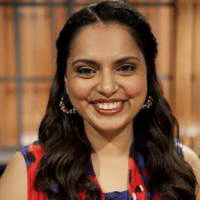 Celebrity Chef Speaker Maneet Chauhan is a top celebrity chef and TV personality who makes regular celebrity chef appearances on Food Network’s The Next Iron Chef and as a featured judge on Chopped and Worst Cooks in America. She is a cookbook author and restaurateur who opened her first restaurant in Nashville in 2014. Maneet is currently in the planning stages of her second restaurant in Nashville, a Chinese eatery.

Maneet’s culinary career began in India. After getting her start learning and interning at some of India’s greatest culinary institutions, hotels, and kitchens, it was off to the United States to continue following her passion. As the only woman competing against forty men, the esteemed Chicago restaurant Verimilion chose to hire Maneet Chauhan as the executive chef where her Indian-Latin fusion foods earned her high esteem and distinction.

When the restaurant decided to open another location in New York City, Chef Maneet moved her kitchen to Manhattan to make sure it met and exceeded expectations, and it sure did—Bon Appétit, USA Today, The Oprah Magazine and more praised Celebrity Chef Maneet’s cooking. Maneet earned her stripes once again as the first Indian female to compete on Iron Chef, and later she pushed the competition to the next level on The Next Iron Chef.

Top chef Maneet has made a name for herself as America’s expert on Indian spices and cuisine, giving cooking demonstrations at culinary institutions, the Guggenheim Museum, and even on ABC’s The View. The highly-esteemed celebrity chef has She established her own culinary and hospitality company Indie Culinaire and soon after her own restaurant in Nashville, Tennessee.

Known for her global fare, Chef Maneet’s specialty is Indian, the cuisine of her home country; her worldly food knowledge is evidenced by her first cookbook entitled Flavors of My World: A Culinary Tour Through 25 Countries. She is also an ambassador for Culinary Institute of America and is intimately involved with several charities from Child Rights and You (CRY), ProStart, and Partnerships for Action, Voices for Empowerment (P.A.V.E.). A proponent of education, Maneet serves as a mentor, commencement speaker, and volunteer for establishments and schools across the United States. The celebrated Indian chef continues to stay on the forefront of the culinary world, but is never too busy to stop and give back.