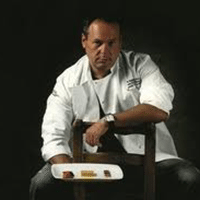 BIO: Celebrity Chef Michael Ginor is largely recognized for his work with Foie Gras, an ingredient considered one of the luxurious in the world. Chef Ginor is co-founder and Chef of Hudson Valley Foie Gras, the most comprehensive Foie Gras producer. Along with partner Izzy Yanay, Ginor was able to utilize scientific advanced production techniques to modernize the ancient delicacy. Foie Gras production is now a unified, controlled and consistent operation based on nature, nurture and technology.

Prior to becoming a chef, Michale Ginor graduated from Brandeis University and received his MBA from New York University. He spent four years on Wall Street and then decided to make a life-altering change. Ginor decided to join the Israeli Armed Forces where he served as a patrol-commanding Captain in the Gaza Strip and as the Israeli Defense Forces spokesperson. His time in Israel did help further his culinary career however as it was here that Ginor discovered the potential of modern-age Foie Gras processing. Today, Michael Ginor’s Hudson Valley Foie Gras distributes its duck products through a network of ditstributors in the United States and beyond.

In addition to his work at Hudson Valley Foie Gras, Chef Michale Ginor is also the founder of Culinary Brainwaves, a company that provides consulting to the gourmet food industry. More recently, Chef Ginor launched La Verdad, a casual Mexican Taqueria and restaurant, in Boston with Chef Ken Oringer. La Verdad has already been named “The Best Casual Mexican Restaurant in the US” by Bon Appetit Magazine and “One of the best 100 Restaurant in the US” by Food and Wine Magazine. Celebrity Chef Michael Ginor is available for speaking engagements, endorsements, and cooking demonstrations.

To hire Michael Ginor for an endorsement, personal appearances, or book signing contact the experts at Celebrity Chef Network at booking@celebritychefnetwork.com  or 212-410-9879.