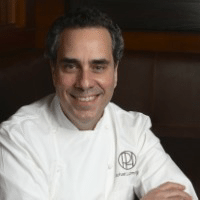 CHARITIES: teaches at CUNY, the Culinary Institute of America and Institute of Culinary Education in Manhattan – co-founded Windows of Hope Relief Fund (to generate support for the families of all restaurant and food service workers who died in 9/11 attacks) – participates in cooking events that benefit March of Dimes, City Harvest and Share our Strength

BIO: Simply put, Celebrity Chef Michael Lomonaco is American Cuisine. As he personally says, “Every great regional American dish has a story to tell. My goal is to celebrate the generosity and abundance of the American spirit with food that is equally bountiful, bold and filled with flavor.”

Since he began his culinary career at Le Cirque, where he worked with Chefs Alain Sailhac and Daniel Boulud, Chef Michael Lomonaco has been conjuring up bold and flavorful dishes using the highest quality ingredients. Lomonaco has spent time as head chef at The 21 Club, where he introduced a menu of bold flavors that redefined American cuisine. Next, he took a position as the executive chef of Windows on the World, a restaurant located on the 107th floor of the World Trade Centers. Critics and diners alike reveled in his dishes and Window’s quickly became on the country’s most beloved restaurants. The restaurant was destroyed in the September 11th attacks and many of its staff members were killed. Chef Lomonaco has rebounded from the tragedy with the opening of Porter House, which was named by Esquire magazine as one of “America’s Best New Restaurants” in 2006. Chef Lomonaco has left his mark all over the New York culinary scene, as he has worked at popular restaurants Wild Blue, Noche and Guastavino’s.

Chef Michael Lomonaco has also extended his culinary footprint into the television industry as host of the Travel Channel’s Epicurious. He hosted his own show, Michael’s Place, on Food Network, and has appeared on The Today Show, The David Letterman Show, Good Morning America, and PBS’ In Julia’s Kitchen with Master Chefs. Once an aspiring actor, Lomonaco’s performance chops have served him well in his professional culinary life.

Furthering his contributions to the cooking world, Lomonaco has published a number of cookbooks and devotes time many charitable causes. Chef Lomonaco teaches at CUNY, the Culinary Institute of America and at the Institute of Culinary Education in Manhattan, and he co-founded Windows of Hope Relief Fund, a fund to generate support for the families of all restaurant and food service workers who died in 9/11 attacks. Lastly, Chef Lomonaco participates in cooking events that benefit March of Dimes, City Harvest and Share our Strength. Michael Lomonaco is available for speaking engagements, cooking demonstrations, and hosting.

To hire Michael Lomonaco for an endorsement, personal appearances, or book signing contact the experts at Celebrity Chef Network at booking@celebritychefnetwork.com  or 212-410-9879.