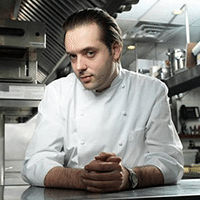 SHOWS: A Matter of Taste: Serving Up Paul Liebrandt

BIO: Chef Paul Liebrandt grew up in London, England and cooked for some of the world’s most esteemed restaurants and chefs including Marco Pierre White at his Michelin three-star restaurant, Raymond Blanc at Le Manoir Aux Quat’Saisons in Oxford, and Richard Neat at the two Michelin star Pied a Terre. Paul also spent time working under Pierre Gagnaire at his three-star restaurant in Paris, France before moving to New York City where he worked with David Bouley at Bouley Bakery.

Paul Liebrandt was chef at Atlas in Central Park South, and at the age of 24 earned the title of youngest chef ever awarded three star’s by The New York Times. After leaving Atlas, Paul cooked at Papillon, then cooked for some high profile clients: Lord Rothschild and HRH Prince Andrew. He continued on to Gilt, and then went on to open Corton. The James Beard Foundation named Corton the Best New Restaurant in the United States.

Vogue, Men’s Health, W Magazine and UK Sunday Telegraph have all profiled Paul and Food & Wine Magazine named him one of the Best New Chefs in the U.S. Paul Liebrandt is available for corporate endorsements, cooking demonstrations and speaking engagements.

To hire Paul Liebrandt for an endorsement, personal appearances, or book signing contact the experts at Celebrity Chef Network at booking@celebritychefnetwork.com  or 212-410-9879.