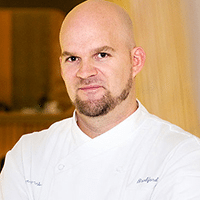 BIO: Bradford Thompson spent many summers while growing up on the coast of Maine lobster trapping and picking fresh blueberries with his grandmother. After graduating from University of Rochester, he realized his passion for food was much greater than originally thought, so he began training under Chef Vincent Guerithault, Alessandro Strata and Daniel Boulud throughout the Michelin Starred kitchens of France. These experiences led to Bradford cooking for one of the finest restaurants in the country, Mary Elaine’s at the Phoenician in Scottsdale, Arizona and while here, he used his strong American culinary skills with his class French training.

Mary Elaine’s won some of the most coveted awards during Bradford Thompson’s time, such as the prestigious Five-Diamond by the American Automobile Association, The Mobile 5 star award, and the esteemed Grand Award from Wine Spectator magazine. Bradford has been named one of Food and Wine Magazine’s Best New Chefs of 2004 and is the winner of the James Beard Award: Best Chef Southwest in 2006. This same year, he was inducted into the Scottsdale Culinary Hall of Fame for his giving to the community and culinary world.

In 2007, Bradford Thompson left Mary Elaine’s and came out with a line of bottled Jamaican jerk sauces. He has been a consultatnt for restaurateurs in New York and Bradford and his cuisine have been featured on the Food Network, NBC, Today Show, CBS Early Show, Wine Spectator, Food Arts, Gourmet, Bon Appetit, and Food and Wine. He is available for speaking engagements, personal appearances and hosting.

To hire Bradford Thompson for an endorsement, personal appearances, or book signing contact the experts at Celebrity Chef Network at booking@celebritychefnetwork.com  or 212-410-9879.